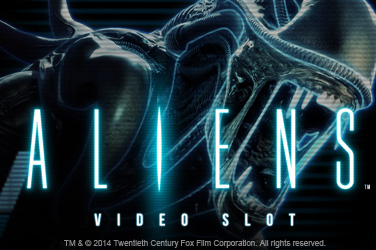 Hook’s Heroes was released late in 2015, which makes it one of the latest NetEnt video slots available. This slot offers up some wonderful features and includes jackpots of up to 900 coins on its 5 reels and 20 paylines. The game slows multiple denominations to be chosen when spinning its reels and offers a large list of bonus features such as free spins, a pirate feature, a fairy feature, and mermaid feature. Wilds and scatter symbols are also used for higher winnings and increased payouts during the base game. This slot can be enjoyed via Windows, iOS, and Android devices as well as through Instant play.

Play Aliens Slots for Free (no Download & No Deposit Needed!)

Play the NetEnt Aliens slot game for free, right here on our website (No Download Necessary & No Deposit Needed). Increase or decrease your bet and change the number of lines. When you’re ready, hit the “Spin Button”. Enjoy!

With 3D graphics, Aliens is one of the more advanced online video slot games NetEnt has created and the five reels, 15 fixed paylines and myriad of meaningful symbols will help any player unlock a win. The object of the game is to blow your way through the waves of aliens who are out for the blood of humans. If you manage to get through them, you’ll get to the queen’s hive, which is both an exciting and rewarding stage of the game.

Providing an experience that is more video game-like than it is slot-like, Aliens is a masterpiece visually and functionally and if you’ve seen any of the movies this slot is based on, you’ll love this game. The game itself has been divided into three main stages, which could be considered to be bonus rounds in themselves, of which the first is the search for aliens and their hive. Players will be able to collect symbols, each of which comes with its own multipliers, to try and score the maximum amount of points on the alien activity scale. Getting this to this point will unlock stage two, the encounter with the aliens.

Stage two is all about kicking some alien butt with the aim of making it through to the queen’s hive. Any of the multipliers you will have collected in the first round will be moved over to this level and you’ll be able to add more of them to a maximum of six times you initial bet. The next level, the hive, is where the encounter with the alien queen begins and for every step you progress, you’ll be awarded a point on the hive meter. Fill this up and you’ll be rewarded with 240 times what you wagered, but this can only happen if you kill the queen and torch the hive.

Though the wins in this game are not easy to come by, it provides one of the most enthralling online gaming experiences you are likely to find anywhere. Sadly, there’s no progressive, which is why we couldn’t give the game a perfect score, but it is intensively interesting and really well made. This is one of the most well thought out games we’ve ever encountered and if you’re not afraid of a little alien action, you will probably love it too. Our rating: 95/100